Vasiliy Lomachenko takes down Richard Commey
12/12/2021
Lomachenko showed his classic lightning-fast hands and incredible footwork last night, in a dominant victory over Ghanaian, Richard Commey. The 33-year-old landed 44% of his total punches and 58% of his power punches, according to Compubox’s punch statistics. Commey landed only 12% of his blows and absorbed 36 landed punches in the seventh round alone, the most of his career. The seventh round was also the round that saw Loma drop Commney with a beautiful left hook.

Lomachenko then stopped boxing midway through the seventh round and gestured to Richard Commey’s corner to throw in the towel. They let their fighter continue, so he could keep his pride, but he was clearly outgunned as Loma urged them again later on in the fight. Commney saw out the 12 rounds, but it was a unanimous decision with scores of 117-110, 119-108, 119-108 at Madison Square Garden in New York.

The former unified champion is now expected to become mandatory challenger for George Kambosos Jnr, who ripped the WBA, IBF and WBO belts from Teofimo Lopez with an upset win last month. 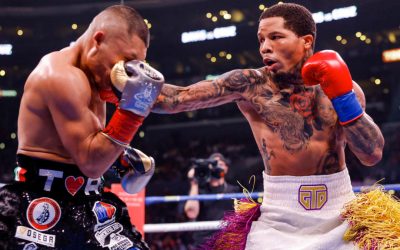